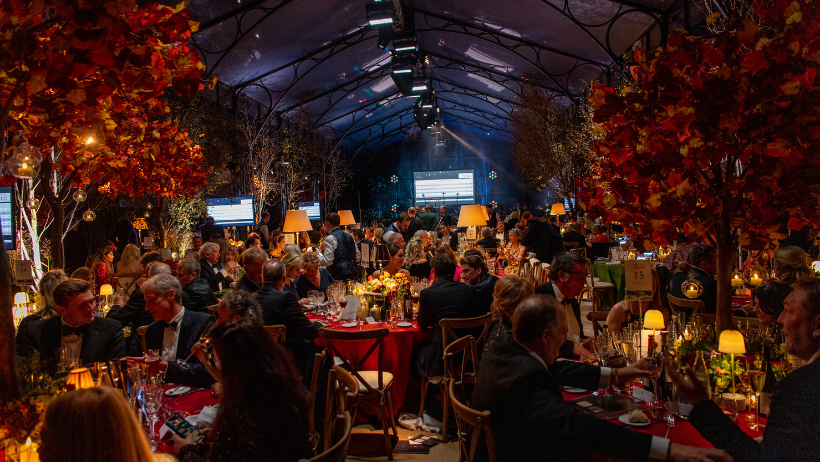 Yorkshire Children’s Charity to host royal at £10,000 a table fundraiser.

Yorkshire Children’s Charity will be hosting a Royal member tonight at its fundraising event at Grantley Hall.

Despite only launching this year, the charity has already raised half a million pounds for families in the Yorkshire region, and will host its official launch ‘A Night Under the Stars’ with celebrities and Royal members making an appearance.

The royal visitor will attend at the same time Kate and William are visiting Scarborough as part of a Royal engagement – the Prince and Princess of Wales are launching funding to support young people.

Kate and William aren’t the only two visiting Yorkshire this week. Sophie Wessex is visiting two Sheffield places on Thursday, November 3rd. She’s heading to the PACES Campus in High Green, as well as Blend Kitchen in the Wards Exchange.

A Night Under the Stars will be held at the region’s most prestigious 5-star hotel and spa, Grantley Hall on November 4th – and will mark the officially launch for the charity, who are welcoming a Royal Head of State as its honourable guest.

A spokesperson for the charity said: “Yorkshire Children’s Charity was founded in January this year with the aim of supporting the 92,000 children in Yorkshire with disabilities, and approximately 352,000 of the region’s children who are currently living in poverty.

“Having already raised over £500,000 in six months to support families and children who are living at a disadvantage, this event will celebrate an incredible first year, whilst toasting to the future plans of this ambitious regional charity.

“The Yorkshire Children’s Charity team has a long-standing connection with this particular Royal family, which has passionately supported children at a disadvantage in the Yorkshire region for over 60 years and is delighted that a representative of their family has agreed to attend.

“Supported by Grantley Hall and Berry’s, the event will be held on November 4, 2022 in a breathtakingly beautiful orangery, supplied by The English Marquee Company and dressed by florist to the stars Fulford Flowers.”

The full event will be designed and styled by the esteemed Party Architect and legendary Royal party planner, Johnny Roxburgh. Johnny has generously donated his services to deliver a spectacular evening of fun for Yorkshire Children’s Charity’s guests.

Party Architect and Royal party planner, Johnny Roxburgh, said: “This year celebrates one year of Yorkshire Children’s Charity, and I’m thrilled to be taking the lead on planning such a special occasion. The event will welcome famous faces and even Royalty at arguably the most prestigious venue in the region – Grantley Hall. Guests can expect immaculate décor, service and entertainment – it’s going to be a fantastic night which really will change children’s lives in Yorkshire.”

Charlotte Farrington, CEO at Yorkshire Children’s Charity said: “We have had an incredible start to the year since our launch in January and I have been blown away by the support from individuals and businesses across Yorkshire. This event is going to be extremely special, and we are incredibly honoured that a Royal Head of State has agreed to attend – it’s such a generous act of kindness. However, despite all the excitement for what is set to be a spectacular event, above all we are there to raise vital funds for the children in Yorkshire who need our help.

“In just the first six months since our launch we have already been able to make a tangible difference to Yorkshire’s most vulnerable children, and fundraising events such as this one will allow us to elevate that important work. Whilst this event presents the opportunity to showcase Yorkshire at its finest, I assure you that we never lose sight of the responsibility we are entrusted with to raise significant funds for the children and young people who depend on us.”

Tickets for ‘A Night Under the Stars’ are priced at £10,000 for a table of ten sold by invitation only. For more information you can contact the organisers here.

No comments to show.

Education Health
for Every Child

If you’d like to hear when we have new events, news and offers, just  leave your email and we’ll do the rest. We won’t share you’re email with anyone else.

We use cookies on our website to give you the most relevant experience by remembering your preferences and repeat visits. By clicking “Accept All”, you consent to the use of ALL the cookies. However, you may visit "Cookie Settings" to provide a controlled consent.
Cookie SettingsAccept All
Manage consent

This website uses cookies to improve your experience while you navigate through the website. Out of these, the cookies that are categorized as necessary are stored on your browser as they are essential for the working of basic functionalities of the website. We also use third-party cookies that help us analyze and understand how you use this website. These cookies will be stored in your browser only with your consent. You also have the option to opt-out of these cookies. But opting out of some of these cookies may affect your browsing experience.
Necessary Always Enabled
Necessary cookies are absolutely essential for the website to function properly. These cookies ensure basic functionalities and security features of the website, anonymously.
Functional
Functional cookies help to perform certain functionalities like sharing the content of the website on social media platforms, collect feedbacks, and other third-party features.
Performance
Performance cookies are used to understand and analyze the key performance indexes of the website which helps in delivering a better user experience for the visitors.
Analytics
Analytical cookies are used to understand how visitors interact with the website. These cookies help provide information on metrics the number of visitors, bounce rate, traffic source, etc.
Advertisement
Advertisement cookies are used to provide visitors with relevant ads and marketing campaigns. These cookies track visitors across websites and collect information to provide customized ads.
Others
Other uncategorized cookies are those that are being analyzed and have not been classified into a category as yet.
SAVE & ACCEPT
Powered by